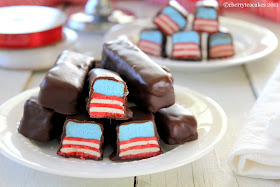 How cute is that? Imagine the shock and awe on your friends and families faces when they bite into a seemingly normal looking candy bar and BAM! It's red white and blue!

I confess the red and white stripes won't be the easiest thing you've ever done. I actually rolled my cookie dough through my pasta maker....and cookie dough is just slighly too soft for that to really go perfectly. You might be better off just doing three stripes and hand rolling...it's a toss up.

One of the keys to success for this recipe is white food dye. I'm not a food dye person, I'd prefer not to use food dyes ever, but, if you want a true white stripe....you just gotta add some chemically white goodness. Where to buy it? I find mine in the cake decorating aisle at Michael's crafts. It's not in with the other food dye though, so look around. If you find glycerin you're on the right path, if you hit fondant rollers you've strayed too far. Besides, how do you make red stripes and blue nougat without food dye? It's worth the chemicals for the cute factor....but only for holidays when all your regular dietary rules are already off. *wink*

The nougat you can flavor in any way you like. I chose rhaspberry but it can easily be vanilla, lemon, rum, mint, almond (oooh that would be lovely), etc.

I hope you enjoy this recipe, and if you need a couple other red, white or blue recipes here are my others:

So if you're ready  to jump into making some red, white and blue raspberry candy bars let's get this happening!

for the chocolate coating:
Dark chocolate

Begin by making the nougat. Put the sugar, syrup, and water into a small sauce pan and put over a medium heat. Stir until the sugar is melted.

Turn heat to high and continue to cook until the mixture reaches 248°, or until it forms a firm ball when dropped into cold water. While the syrup is cooking, beat the egg whites until they form stiff peaks.

Slowly pour the hot syrup into the beaten whites of eggs. Beat the mixture constantly while pouring the syrup into the whites, and keep beating until the candy
begins to stiffen. Add vanilla. Add blue food coloring.

Turn the candy onto a buttered slab or platter. Allow to cool.

While the nougat is cooling, make the cookie dough.

Cream together the butter (I do not allow butter to soften), sugar and any flavorings you’re using. Beat until just becoming creamy in texture. Beat in the egg until well combined, make sure to scrape down the sides of the bowl. Add the sifted flour and mix on low until a non sticky dough forms. Divide the dough into 3 pieces. Mix red food coloring into two pieces and white food coloring into the remaining third.

Roll out each portion between parchment paper to a thickness of about 2 mm. Refrigerate for a minimum of 30mins.

Once chilled, peel off parchment, and stack the layers. Place dough on a lightly floured surface. Cut the dough into a 3x.75 inch bars. Pierce each cookie four or five times with a chopstick or the base of a thermometer. Arrange shapes on parchment lined baking sheets and refrigerate for another 30mins to an hour.

Re-roll scraps and follow the above process until all scraps are used up.

Preheat oven to 350°F. Bake until golden around the edges, about 8-15mins depending on the size of the cookies.

Leave to cool on cooling racks.

Cut the nougat into the same shapes as the candy bars, and stack on top.

Place two thirds of the chocolate in a double boiler. Melt slowly to 107 degrees. Remove from heat and stir until it reaches 110 degrees. Add in remaining third of chocolate and stir to combine until the mixture reaches 90-93 degrees. Use immediately.

Place a candy bar on a fork and proceed to spoon the tempered chocolate over it, covering completely. Line a cookie sheet with wax paper. Set completed candy bar on the sheet. Repeat with the remaining candy bars. Set the cookie sheet in the refrigerator to set the chocolate.